The Map Editor is the tool the Ashes of the Singularity team uses to create maps. It has many powerful options, but be aware - generating maps at high quality levels, and especially at large sizes, requires a ton of CPU and RAM. Minimum of 16gb RAM is recommended for creating maps.

To enable the Map Editor add the “-modding” (without the quotes) to the Launch Options for the game (in Steam, right-click the game, go to Properties, click Set Launch Options in the General tab). That will add a Map Editor button to Modding menu of the game. From there you can decide if you want to modify an existing map, or create a new one. If you create a new one the menu to the right is presented. If you are going to edit an existing map, you should make a copy of the original map and modify the duplicate with a new name.

DX11 should be used with the Map Editor as running DX12 will cause issues where objects such as the cursor don't properly display. Running windowed mode will also make it easier if you have issues and need to force close the game. 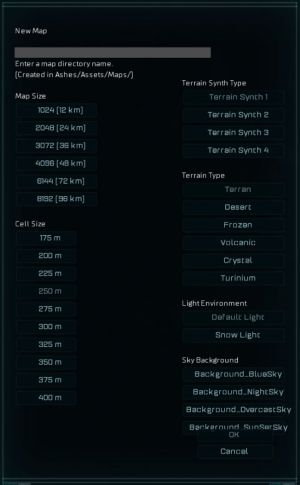 When creating a new map, there's several options to choose from:

I selected Terran (grassland) terrain and default Lighting. As you will see in the demo I change to Frozen Terrain later, it’s easy to do so don’t worry too much about your selection here.

The following is the default map that you are given. It starts with two player Nexuses, a Turinium Generator and one other region. But we have lots of things we can add.

Logical view of a super-basic map

Teal is plateau, red is mountains, blue is basins, yellow is hills and the green is plains.

The player Nexuses are in the upper right and the lower left. The point of this map was to create a single channel for the players to battle through. The upper part is biased for the player on the left, giving him a plateau to fire down at enemy units driving by the area below and the reverse for the southern part of the map.

There are three Turinium_Generators, one in the center of the map and one on each of the two plateaus overlooking the plains pass. The goal is to make one Turinium Generator easy for each player to grab so they need to battle over the one in the center (since victory points are awarded to the player who holds the majority of generators).

Rebuilding the terrain and toggling to map display mode gives us a look at what the map will look like. I like the pass, the mountains and the basin. But the rest looks a little bare. So I need to add more details to make that area more interesting. I often forget how big the Ashes maps are, so when I toggle to the real map they don’t seem as full as I imagined.

In this update I’ve added more opportunities for the defending player. The overlooking plateaus can only be accessed from the Nexus region so they get to attack in the central channel as well as attacking units forced to come by the plateau wall on their way to the Nexus.

I’ve also switched it over to the Frozen terrain. I think its brutal hostility fits the maps focus better. I put the build quality up to 4 and increased the erosion levels so it looks great. It took a lot more time to generate (btw: don’t attempt to use high build levels on the largest possible maps unless you have a lot of memory) but it looks great.

This map is a lot of fun to play, but may favor aircraft too strongly (since they can bypass all of these defense and attack anywhere. In a later section we will talk about creating scripts where we could do things like disable aircraft so the players are forced to slug it out.

By default, maps will have lowTurinium Requirements. (How much Turinium is required for players to win.) To increase this, select "Edit MapProperties.xml" under the "File" menu in the top left corner, and change the number inside the victory_point_cap="500" to the desired Turinium. (Using Notepad++ is recommended) Save the .xml file, but the Turinium levels won't be updated until you open up the map again in the Map Editor, and Regionalize or Regenerate the map terrain. Regionalize is much faster than Regnerate, and is all you need to do for the purpose of updating Turinium. To check a maps Turinium requirements, you can also play the map in a Skirmish and in the top right corner you will see a Turinium value in the player panel.

Maps will not be downloaded when a player joins a lobby that is on a new or edited map, attempting to start the match will result in a crash. A modder will need to upload their map to a web hosting platform such as Dropbox, and everyone wishing to play that map will have to manually download and install the map into \Steamapps\common\Ashes of the Singularity Escalation\Assets\Maps. Every time that map receives a change, even if the name remains the same, it will have to be redownoaded. We don't currently have Steam Workshop support enabled for Ashes, but it is something we are hoping for.

The current form of the Map Editor wasn't intended for public use, which is why it's hidden behind the -modding command. The Map Editor is rough and a number of unintuitive things can cause crashes with no explanation to the user, causing much frustration. There's a number of things the Map Editor doesn't like which can cause crashes during regenerating terrain or loading into it. Alternative to crashes, problems can also be manifested by the map editor endlessly hanging at regenerating terrain. (If you check your CPU usage, you can tell when the terrain generation is actually working or when it has frozen.) If you are experiencing a crash or map editor being stuck during terrain generation, ensure none of these things are happening:

Regenerating Terrain will automatically create a map thumbnail MapPreview.dds in the map directory which shows up in the map selection menu and in the in-game minimap. However, the default generated thumbnails are quite messy compared to ones which are manually created, which is what every map in the game uses. Creating a release quality map thumbmail involves a few steps, require some basic knowledge of either Adobe Photoshop or GIMP (which is a free alternative), downloading this map preview shade and will require the Intel .DDS plugin to save the thumbnail to the required format.

You should now see this much nicer thumbnail when you load the game. Regenerating the map will automatically create a new MapPreview.dds file which will overwrite the fancy one you have made, to prevent this you can right click on it, properties and choose Read Only so it won't be overwritten. If you change the terrain layout of the map you will want to create a new thumbnail, but if you are only changing the building layout there is no need to change the thumbnail.